The Pullman Saigon Centre has come up with a novel way to keep abreast of evolving food trends in Vietnam — a pop-up style burger bar. The brainchild of general manager Tony Chisholm, the concept came about in recognition of the need for high-end hotels to move on from “the old historical cliche” of offering just club sandwiches.

“The burger is the modern club sandwich,” says Tony. “People are ordering burgers over club sandwiches these days. Once upon a time it was the club sandwich, high tea, and a buffet lunch or dinner, but what I’ve noticed is that hotels are starting to change tack and are trying new things.”

It’s another example of the disruption to business-as-usual in the hotel industry at the moment, and is as much about changing ways of thinking than just simply throwing money at an idea and hoping it works.

Instead of undertaking a wholesale renovation of the hotel’s ground-oor lobby bar, Tony and his team have simply added striking ‘burger boards’ above its triangular bar on each of its three sides to showcase their offerings. The typeface and styling they’ve used give it an Americana feel without going too far so as to be kitsch. From the outside, the eye-catching burger decals on the windows add to the burger joint feel.

“I thought with the visibility that we have on the street on both sides, we would try to connect more with potential clientele who aren’t guests staying at the hotel,” says Tony. “We aimed for something a little more lifestyle orientated, breezy and fun, and thus, we settled on this concept.”

Indeed, when you walk into the bar, you don’t experience the initial sensation of walking into yet another hotel bar in a lobby. For want of a better word, it’s cool. The staff are vibrant and genuinely look happy to be working here. It looks fun, which has an energising effect on customers, and no doubt on businesspeople who have to while away much of their lives in hotel bars staring into the bottom of a whisky tumbler.

But probably the most striking thing about this concept is precisely the question Tony himself had to answer many times during the conceptual stages of his idea:

“Who would want to go to a hotel for a burger?”

He knew if he could answer this question, then he might be onto something. While condent he had the right answer, he had to convince key stakeholders at Accor Hotels, the group that owns the Pullman brand, that having an Americanised burger joint in the middle of a ve-star hotel would work.

As it turns out, he did it. For Tony, the answer to the burning question had always been simple: “Who doesn’t like a good burger? So, why not do it?” Now, there’s a burger bar at the Pullman Saigon Centre which serves up top-quality burgers at reasonable prices, and according to Tony, it’s been a hit.

“We didn’t go with typical ve-star hotel pricing. We went for a stand-alone restaurant concept and as a result 50% of our customers are walk-ins which indicates to me that they recognise the value in getting a burger here.” 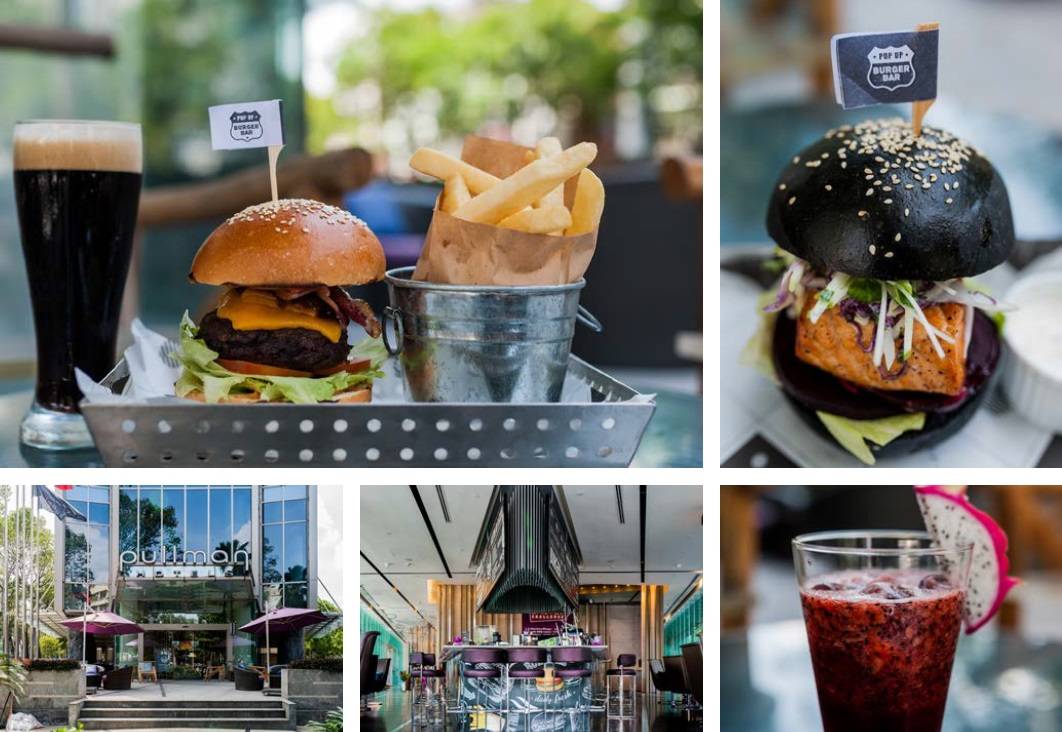 The wagyu burger with the charcoal black bun has proven to be the most popular, making up approximately 60% of sales. Apart from tasting great, much of its success has been off the back of diners being able to personalise their burger by choosing the bun, meat (or not), top-ups and sauces. With ‘free-ow chips’ (a great thing) and depending on whether you order for lunch or dinner, a soft drink or draught beer, it will set you back VND305,000 all inclusive.

There are six other burgers to choose from — tuna, pulled pork, chicken, tofu, Italian, soft-shell crab — and each month there’s a special. Last month was a pho avoured wagyu burger, and earlier there was a ‘detox burger’ incorporating a salmon steak — with luck it will grace the burger board again soon.

While Tony concedes that the burger urge may soon be taken over by a different trend, the beauty of the pop-up concept is that the Pullman Saigon Centre will be able to change with culinary trends in Saigon and maybe even become a culinary inuencer itself.

“The way I see it, the burger trend will be around for a while,” says Tony. “But if bagels suddenly become trendy, then we’ll pop up a new sign and become a bagel stand tomorrow.” — Matt Cowan.

By the Word Vietnam